Railtons were built by the Fairmile Engineering Company in Cobham, Surrey. This company was the enterprise of Noel Macklin who had been building Invicta cars at the same premises. Invictas were hand built using expensive materials and were no longer selling. Macklin was determined to produce a car with similar performance and good coachwork at an affordable price. Following evaluation, he was very impressed by the performance of the new Terraplane model launched by Hudson Motors in 1932 and came to an agreement to import the straight eight cylinder chassis. Improvements to the chassis and suspension were carried out so that they handled in a way more to the liking of British motorists. He then contracted several independent coachbuilders to design and construct Light Tourers, Drop Head Coupes and Saloons. F. Gordon Crosby, the well known motoring artist, designed the Railton radiator grille in a similar style to the Invicta; Reid Railton, the designer of Land Speed Record cars agreed to his name being used for the new car.

Production began in 1933 and continued up until the outbreak of WWII. Six cars were assembled during the war for use by the Metropolitan Police. After the war four more cars were built using chassis stored for the duration and two cars were constructed on post war chassis. 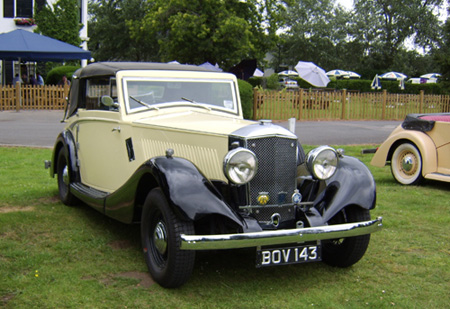 The majority of the cars were of 8 cylinders, 4168 cc, 28.8 HP engine capacity. From 1936 two smaller 6 cylinder engines were available producing 21.6 and 16.9 HP in order to supply demand for cars in the lower road fund tax charges bracket. In 1938 Railton Cars also launched a small 10 HP car. This was based on a Standard Flying 9 chassis fitted with a 10 HP engine. These were effectively a miniature copy of the Coachcraft Fairmile Drop Head Coupe and Cobham saloon which were available on the larger chassis. Some 50 of these little cars were made.

As the 1930’s progressed, the Hudson 8 cylinder chassis became longer, wider and heavier which resulted in the engine being installed with a twin choke carburettor and manifolding. As a result the power increased slightly to 122 BHP at about 3800 r.p.m. This was fairly impressive at the time for an un-tuned side valve engine but could be increased easily by the fitment of the optional alloy cylinder head.

All 8 cylinder chassis, when combined with light coachwork, produced a car with staggering acceleration, torque and top gear flexibility. 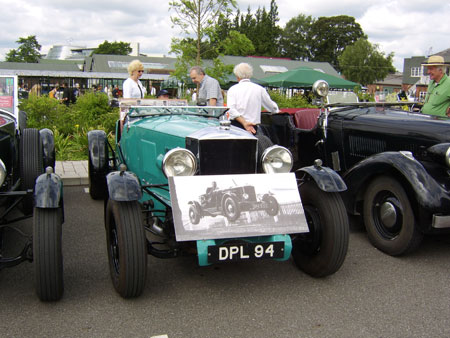 1935 Railton Light Sports Tourer, one of only two built. The picture displayed in front of the car shows the other Light Sports 'flying' at the top of the Brooklands Test Hill during the 1935 'Motor' Magazine road test report. 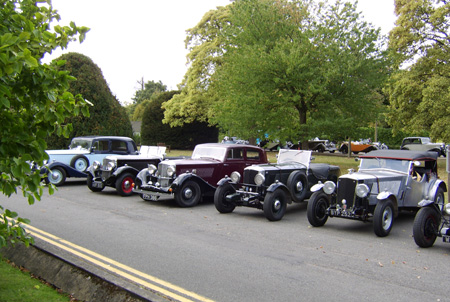 Part of a gathering of ROC member's cars at Bletchley Park, showing various body designs in the foreground and others in the distance.

At least seven different vehicle coachbuilders were used, these included: John Charles Ranalah, R.E.A.L, Carbodies and Coachcraft Ltd. The latter producing the largest number of bodies. Customers could also specify their own preferred coachbuilder and create their own design. In 1935 Railton built two Light Sports Tourers which were designed to offer the ultimate in performance; both cars are still in existence and used. The chassis were shortened, the engine set back, double friction shock absorbers were fitted to each corner and the body, was a skimpy, all aluminium two seater without trimming except for the seats.

In the period 1936 – 1938 possibly three Limousines were also constructed. This was a long way from Macklin’s original concept of high performance touring cars but ever an entrepreneur he would no doubt have been happy to supply the chassis. 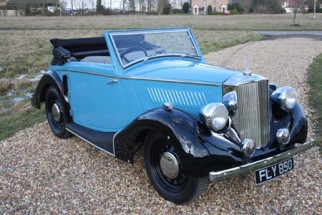 This very attractive 1939 Railton 10 HP Drop Head Coupe has recently been the subject of a long and extensive restoration by the owner, who deserves every credit for his dedication to the project 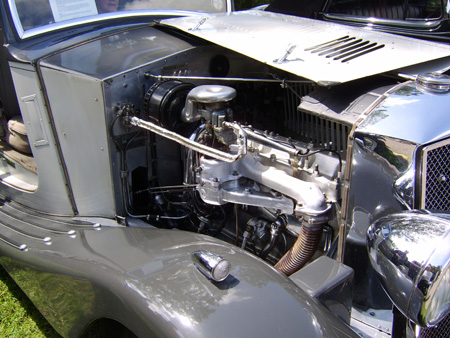 The engine bay of a 1935 Railton 8 cylinder 2 door Saloon. The working side with large downdraft carburettor, manifolds and distributor.

Brough Superior cars were the brain-child of George Brough who along with his father had been building motorcycles for nearly two decades by 1934. At this time he decided to produce a car using the same name. The initial prototype was constructed using a one off chassis with power from a Meadows engine. He had agreed a body design with Atcherley Coachbuilders of Birmingham. The cost of making individual chassis and the expensive Meadows engine probably put an end to this concept. Railton cars were by this time selling well and it appears George Brough managed to obtain the same 8 cylinder Terraplane chassis to use as the base for his car. 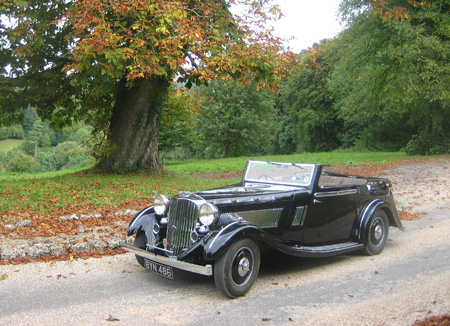 1935 Brough Superior 8 cylinder Dual Purpose. Pictured three years ago in the grounds of the country house where it spent the first years of its life.

The car was launched in 1935 with the coachwork by Atcherley initially in the form of a Dual Purpose, (Drop Head Coupe), but later in the ‘30’s a saloon was also offered. The bodies were strong and durable, if a little heavier than the Railtons. In the case of the Dual Purpose it was claimed that the hood could be erected in one minute by a single person. George liked using chrome bright-work on his motorcycles and it was the same with the cars. All of the bonnet air vents, (top and sides), were plated, there was a bright strip mounted the full length along the top ridge of all wings and most cars had deep door mouldings complete with a GB monogrammed badge in the centre, all in heavy plate. 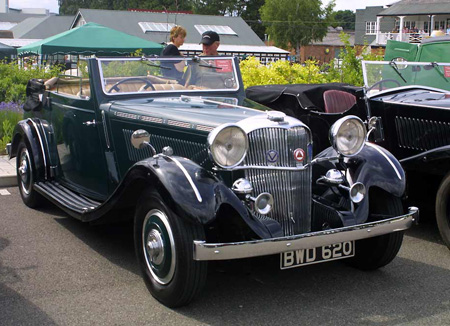 In response to the development by Railton of the ultra fast Light Sports Tourer in 1935, Brough Superior developed an Alpine Grand Sport in 1936. This was a 3.5 litre 6 cylinder chassis with the engine supercharged and fitted with a light two seater body with minimum trimming. As far as is known only one was produced, although photographs do exist showing two different registration numbers. George however was in the habit of changing numbers for the purpose of publicity. The Alpine GS still exists, has been fully restored and is regularly campaigned at hill climb events.For just over a year Brough managed to secure 8 cylinder chassis, then it appears the supply ceased. This may have had something to do with Noel Macklin of Railton Cars as it is believed there was rivalry between George and him.

By1935 Railton Cars were buying a lot of chassis from Hudson and pressure from Macklin on Hudson Motors, might have resulted in Brough Superior no longer having access to the preferred 8 cyl. chassis. For the remainder of the production years, Brough Superior had to make do with the 6 cylinder 3.5 litre chassis but they offered a supercharger as an option.

In 1938, Brough Superior embarked on a new project. A chassis was designed to take a Lincoln V12 engine. It was a low slung chassis with a saloon body installed by Charlesworth. The prototype was not fully sorted by the outbreak of WWII, after which Brough Superior did not recommence any production. This car also still exists and forms part of a private collection, but attempts to cure an inherent cooling problem have so far not been successful. 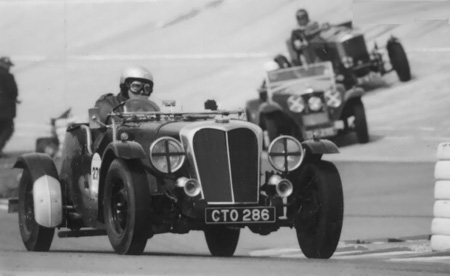 CTO 286. Believed to be the only Brough 6 cylinder supercharged Alpine Grand Sport. Built in 1936.

Possibly no more than 80 Brough Superior cars were produced compared with some 1500 Railtons. The survival rate is high which may be due to the strong body. Like the Railton, the Brough can provide reliable motoring and is capable of cruising at speeds which are not an inconvenience to modern traffic.

Prior to 1932, Hudson Motors of theU.S.A. produced Hudson and Essex vehicles. In 1932 they launched the Terraplane which was a new chassis design and a totally redesigned engine from one of the Essex models. Initially launched as a 6 cylinder the 8 cylinder followed shortly after. The early cars were called Essex Terraplane whilst the Hudson badge was still used on vehicles using an older chassis and engine. As the ‘30s progressed, the 6 cylinder models became known as the Terraplane and the 8 cylinder cars became Hudsons, the old chassis having finally ceased production.

With some minor technical changes to the Terraplane chassis and engine units the design was to remain the basis of all Hudson models until the early 1950’s. 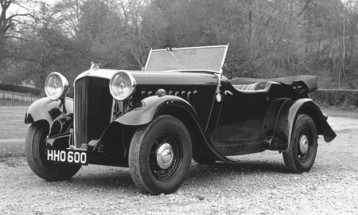 An early 1932 model Essex Terraplane 6 cylinder with English Windoverette coachwork. The picture is recent but Black and White gives a period feel. 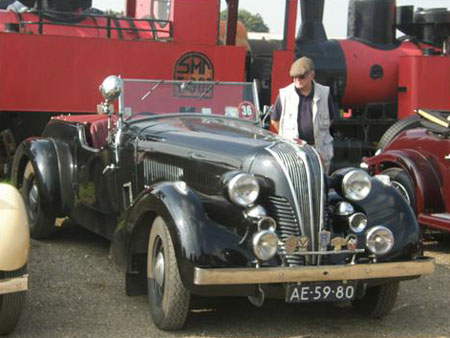 1937 Hudson 8 Century Tourer, supplied new in the U.K. but now living in the Netherlands.

Hudson Motors had a sales and service operation based in the Great West Road,London, which continued in business until the 1960’s. In the ‘30’s, it was possible to purchase an American bodied car or a standard chassis to then have coachwork fitted by a British coachbuilder. Many large dealer groups in Britain had a Hudson Franchise. 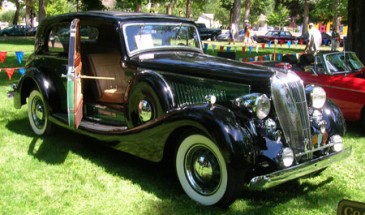 1936 Hudson 8 cylinder Special Sports Saloon with an English body by Coachcraft Ltd. Now owned by a ROC member in the U.S.A.

Without the Terraplane chassis there would not have been a Railton or Brough Superior as we know them today.

The Railton Owners Club caters for the needs of Railton, Brough, Hudson, Essex and Terraplane vehicles built in the 1930’s, if for no other reason than the fact that mechanical components are similar and we have the best stock of spares available in the world.

OUR CARS AND MOTOR SPORT

During the 1930’s, Railtons and Essex Terraplanes were successfully raced at Brooklands and elsewhere. Railtons were a popular choice for the ‘Rally Scene’ with two cars being placed effectively in joint first place in the 1934 Alpine Glacier Cup Challenge, (they both achieved a perfect point’s score). Several cars competed in the Monte Carlo Rally with excellent results and standard 6 cylinder Terraplanes did well in these events compared with many cars with larger engines and a more expensive price tag. Many more competed in British rallies.

To quote the son of one owner of a Railton, which was especially ordered new for use rallying in the UK and Europe, “My father had been rallying Alvis and Lagonda for many years and while competing in a Lagonda 4.5 Tourer in the 1935 Alpine Glacier Cup Challenge, he was overtaken by a Railton, could not keep up and was left in the dust – He just had to have a Railton”.

In 1934, a Railton 8 Tourer with Berkeley coachwork came third in the South African Grand Prix. 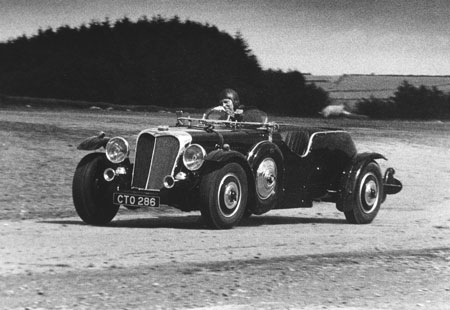 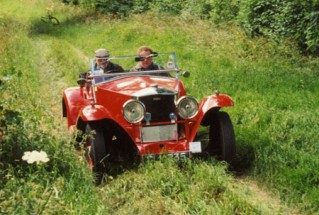 This 1934 Railton Sargent Special is a regular participant in VSCC and other Rallies with considerable success. Seen here on a typical 'white road' used for such events.

Today, many of our members enjoy using their cars for Motor Sport. Although a few years ago now, in 1997, two Railtons were entered for the Peking to Paris challenge. Both finished the distance, one winning its class.

Several members, using Railtons, the Brough Alpine GS, Hudson Spikins and Terraplane models participate in VSCC and other organised hill climb and rally events and on occasion win best in class etc. A Brough Superior owner participated in the Lands End to John O’Groats ‘le jog’ and the same car and a Railton have participated in the London to Edinburgh challenge. The latter winning the class. 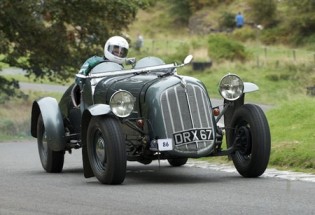 This is the 1935 Hudson Supercharged 8 cylinder 'Spikins'. It was a highly potent machine when new and still participates in VSCC an other events today, as this recent picture illustrates. 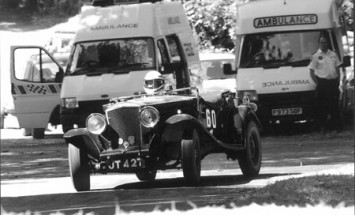 In the same owner's hand for over 40 years this 1933 Railton Ranalah Tourer has possibly competed in more hill climbs, rallies and other sporting events than any car in the Club. 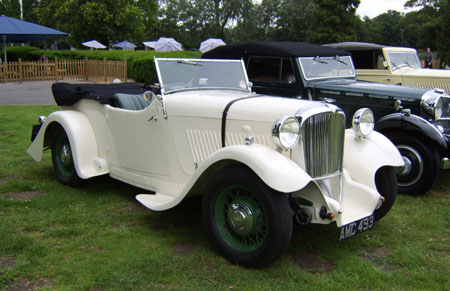 A handsome 1932 Essex Terraplane Tourer with a Supercharged 6 cylinder engine, which raced successfully on many occasions at Brooklands in the 1930's.